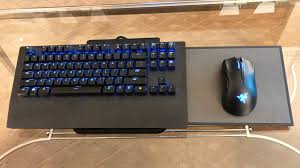 Much like the many users of the Xbox, retailers that sell laptop units and gaming devices are hungry for any new information about the Xbox One. And so it’s welcome news every time Microsoft or Razer gives updates—even teasers—of what gamers and sellers can look forward to. In the past couple of months, Razer has been teasing two brand-new Xbox One products: a wireless mouse and a keyboard.

Renowned gaming peripheral brand Razer released the full photos of these products late last month. For reasons unknown, the updates mostly flew under the radar. But, with the coming 2019 Consumer Electronics Show (CES) on January 8, the company is now prominently advertising the Xbox One set.

Razer has yet to disclose the name of the set, though. There hasn’t been any detailed information about the products, too. That said, many are hopeful that with the teasers, their availability won’t be far behind.

The Microsoft and Razer Tandem

Almost a year ago, Microsoft and Razer joined forces to produce a mouse and a keyboard set for the Xbox One. Microsoft has been dropping hints about the Xbox One keyboard and mouse support for a few years now, but for the most part, everything is unclear. With Razer in the mix, the support is finally becoming a reality.

The software royalty has partnered with Razer to enable the latter’s Chroma RGB lighting support in Xbox games. The Razer’s Chroma allows gamers to have assortments of colors to light up on their keyboard. The Chroma is also helpful in games like Overwatch where the colors can spot chances of cooldowns.

Razer also plans to let game developers take advantage of its API to deliver Chroma lighting effects on other video games. Microsoft will also allow developers to identify if a keyboard or mouse is available on an Xbox One. Also, some video games could only match up with keyboard and mouse users with similarly outfitted gamers. The developers will be responsible for balancing the games, and Microsoft will provide all the tools necessary to make sure video games can apply for the support in many different ways.

The Long Wait Is Almost Over . . . Hopefully

Xbox One users have been clamoring for mouse and keyboard support for some time now. The answer to the demand has been a long wait. The Xbox system was launched in 2013, and the support has finally arrived just in the latter month of 2018. The long wait wasn’t a result of neglect, but of extreme caution. Microsoft had long opposed mouse support because accurate mouse movements may give some players an unfair advantage.

But thankfully, with the teasers uploaded months ago, some key details have given Xbox One enthusiasts something to get excited about. Based on the photos, the set will include an Xbox button at the bottom right part of the keyboard. The box will also likely to contain a slide-out mouse mat. Xbox players have to wait until the CES to find out the exact cost of the products.