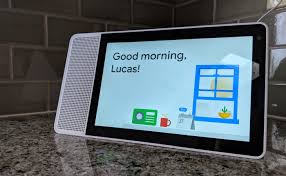 The world is always on the lookout and in search of the latest trending gadgets.  With the tech industry always trying to make life easier, we are all gushing over this new and stylish home-control system in the market—the Lenovo Smart Display.

The New Style and Design

Its new look and design is at the top of the list of why Lenovo Smart Display stands out.   It has this sleek and minimalistic look that easily blends in with your other house items.  It actually looks like a tablet, supported by a stylish case. It has two variants, an 8-inch and a 10-inch model.     Both have white trims with different back finishes. The 8-inch is more conservative with its soft-gray finish while the latter has a bamboo-textured finish on it, making it stand out even more.

Now the new look was designed as such not only for aesthetic value.   Its quirky and unique frame gives some extra space for its speaker. This also allows it to stand and work both vertically and horizontally.  Simply put, this design is not only beautiful but also functional.

Closer Look on its Features

With high definition screens on both models, videos are clear and vivid.  When connected to Nest Cam, the bigger screen definitely makes images look better and clearer compared to its competitors.

Unfortunately, this device does not have the best audio prowess, as it was not specifically designed to wow us with its sound quality.  Although, it is fair to say that the sound quality could be rated good enough. When the sounds are also amped up, it could be a little hard to chat and give commands with the device.  However, this is quickly resolved when the volume is turned down. This device also gets additional points for having very good voice recognition. It is super sensitive that it will recognize its owner’s voice even with a whisper.

This new gadget is already out in the market.   You can find it on the shelves of stores that sell cell-phones, tablets, and other gadgets, with July 27 as its release date.  The smaller version is priced at $199, while the 10-inch model’s rate is $249.  Its price range is close to its competitors’ selling price.

The Lenovo Smart Display’s elegant new look and voice assistant feature make it a winning home-control gadget.  Its price rate and its clever features make it hard for you not to want this device as a part of your home.