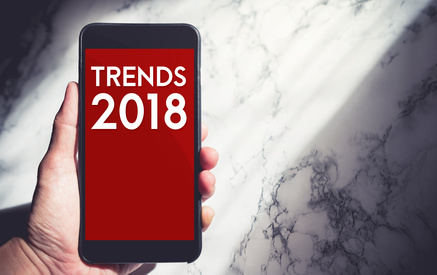 It seems like every year, there are brand new gadgets and gizmos that take things to the next level. The technology available right now is so much more than what we had a couple of years ago. And its progress is expanding all the time. So, as 2018 is just a few days away, let’s see what gadget trends we can expect to wow us even more.

Unlike other smart technologies, virtual reality (VR) had a rather slow start. The buzz began with basic VR headsets. They weren’t as prevalent as other gizmos. The older VR headsets needed extra accessories that were also pretty expensive. Also, users were required to have technical knowledge to make them work.

But thanks to the steady VR developments made this year, 2018 will be all about taking VR mainstream. A good sign of this prediction is the launch of the Facebook Oculus Rift. The site’s VR feature is created using ‘outside-in’ tracking techniques that boost accuracy.

2017 was all about smart devices. Now, 2018 will be about using those smart devices in many incredible ways. One of these amazing methods is keeping homes secure. There will be an influx of gadgets that provide homeowners more control over the security of their homes.

These days, video doorbells are becoming the norm. This smart security device gives people the ability to see who’s at the door even if they’re not physically at home. It’s expected that more and smarter improvements will emerge next year, most of which will improve the technology of existing security devices like the incorporation of mobile apps and cloud backups.

Wearable devices have been around for quite some time now. The likes of pedometers are used by consumers worldwide. By 2018, experts anticipate superior options for wearable gadgets. Wearable pollution trackers, for instance, are developed to monitor the air quality that surrounds people.

The demand for breathalyzer wristbands will also increase next year. This wearable gizmo enables users to check their blood alcohol content. The wristband detects chemicals through the sweat on the skin. Even fitness trackers will be upgraded in 2018. Fitness tracking rings are expected to sell like pancakes since they have the same capabilities as wristbands, but in a much smaller package.

The notion of “Internet of Things” has considerably grown over the years. The concept refers to a network of devices, gadgets, software, and connectivity that helps improve the life of its user. 2018 will undoubtedly see an evolution and expansion of gadgets that can be linked to one another. That means the connection will go beyond mobile phones and computers.

Smart devices will soon launch long drawn-out ideas such as smart locks for the home. The increase in linked devices will guarantee that the Internet of Things will be easier, faster and more accessible to all. The interconnection of web-based elements is a trend that has been discussed for some years now, but 2018 will be the year for its absolute growth and progression.

So, which 2018 gadget trend are you excited about?